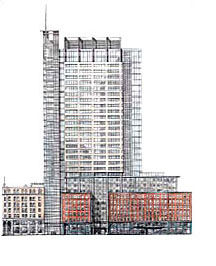 With new parks planned at the front door and a cleaned-up Fort Point Channel at the back, the owner of historic Russia Wharf is planning to build a $275 million complex that would include condominiums and apartments, a hotel, a nightclub, and a 31-story office tower.

Three 105-year-old buildings at Atlantic Avenue and Congress Street make up Russia Wharf. The Russia Building, designed by Peabody & Stearns, is the most prominent structure on the wharf and the only one that is to be kept intact.

The owner, Equity Office Properties, yesterday outlined the plans it has filed with the Boston Redevelopment Authority.

About 50 condominium or apartment residences in the seven-story Russia Building, at 530 Atlantic Ave., would look out on prime land being reclaimed by the Big Dig - perhaps the first major development announced in anticipation of the elevated Central Artery being put underground and covered with a 30-acre greenway.

Chicago-based Equity, the largest owner and manager of offices in Boston, also plans to build a hotel with 300 suites. It would occupy much of the first 10 floors of the site, behind the facades of the Graphic Arts Building and the Tufts Building, whose entrances are on Congress Street.

The Russia Wharf project is being designed by CBT/Childs Bertman Tseckares Inc.; this view is from Congress Street

Set back from the surrounding streets but rising to about 395 feet would be the office tower, with 500,000 square feet of Class A office space.

Mark Maloney, director of the Boston Redevelopment Authority, said the height is in keeping with other buildings in the area, such as One Financial Place and the Federal Reserve building.

''I think Equity Office knows its market, and this shows strength in the office sector in the future, he said.

Originally, Equity had planned no housing in a development that would contain up to 1.1 million square feet of office space and reach as high as 500 feet.

* A waterfront terrace on Fort Point Channel, across from the Tea Party Museum.

* A jazz or blues club on the Congress Street corner where the Three Cheers restaurant and bar is located.

* An extended Pearl Street pedestrian walkway on the north edge, running from Atlantic Avenue to the Harborwalk and to a Harbor Shuttle dock.

* A 10-story atrium and sculpture garden in Nelson Court, a pedestrian way that would run between Pearl and Congress streets and separate the Russia Building residences and the office-hotel portion of the block.

Bob Kaye, who works in Equity's development division, said the hotel will be aimed at business people during the week and tourists on the weekend. Prices, he said, will be more affordable than at four- and five-star hotels in Boston.

The new Russia Wharf, which is near attractions like the Children's Museum, will also have a distinctive ''lighted spire'' running up one corner of the office tower that will make it a new destination for residents and visitors, said Maryann Gilligan Suydam, Equity's regional senior vice president.

''We're talking about something almost a little playful,'' she said.

Equity, she added, has had numerous meeting with neighbors and city officials over the last four years to develop and refine the plan.

The spire - a tower of light that might remain on all night - was a response to Mayor Thomas M. Menino's desire for a distinctive visual feature, she said.

Russia Wharf currently houses 380,000 square feet of office space in its three buildings. It was purchased by Equity Office, along with other Beacon Cos. properties, in 1997.

One of the biggest beneficiaries of a transformed Russia Wharf may turn out to be the Massachusetts Horticultural Society, which was given three blocks of Surface Artery land between Summer and Pearl streets. The society has made little progress in raising the money it needs to build a winter garden or other facilities, though, and planners are losing patience. Equity Office executives agreed they do not want vacant land across from their new residences.

Obtaining city and state permits for changes at Russia Wharf could be time-consuming, Suydam said. She said Equity hopes to begin construction in 2004, about a year before the Big Dig is completed, and finish the project in 2007.

The MBTA's new Silver Line bus corridor, from South Station to the World Trade Center, is being built in a tunnel underneath Russia Wharf.

Although Equity Office is the largest publicly held owner and manager of property in the country, it is not known as a developer. Suydam said, however, that Equity has more than $1 million worth of construction under way nationwide. And both she and Kaye were employed by Beacon when that company developed nearby Rowes Wharf as a hotel, residential, and retail complex.

Russia Wharf, originally known as Gray's Wharf, was bought by a leading trader of Russian goods - hemp, iron, and canvas, all used in shipbuilding - in the late 18th century.

Thomas C. Palmer Jr. can be reached at tpalmer@globe.com.