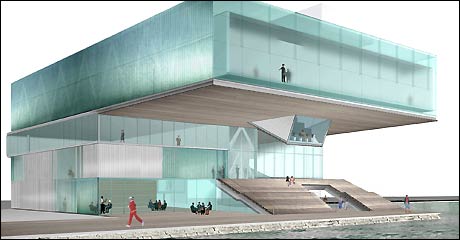 The Institute of Contemporary Art today will unveil the design for a glass-walled waterfront museum to be built on South Boston's Fan Pier. The new ICA, potentially the first art museum to be built in Boston since the Museum of Fine Arts opened its doors at its current site in 1909, would serve as a centerpiece for contemporary art in a city long perceived as hostile to new work.

Because of a construction timetable that calls for a 2006 opening, the museum could be the first completed piece of the Pritzker family's long-discussed waterfront development.

The ICA has had 11 addresses since it opened as the Boston Art Club on Dartmouth Street in 1936. Museum director Jill Medvedow, who has made moving to a new building her mission during her four-year tenure, hopes the next move will be the last. The proposed four-story, 62,000-square-foot building, designed by the New York firm Diller + Scofidio, would triple the ICA's current exhibition space, include room for video and installation art, and feature a 300-seat auditorium for contemporary dance, film, theater, and performance. Groundbreaking is planned for late 2003 or early 2004.

The ICA has been looking to build a museum for years. Its current Boylston Street home, purchased from Boston for $328,000 in 1993, is so small that the museum has to shut its doors for up to 10 weeks a year to change exhibits. It has also forced Medvedow to hold the ICA's summer art camps, started two years ago, in borrowed space in East Boston and the South End.

The new building would offer a fresh start. For the first time, the ICA would collect art, focusing on works of the 21st century. Instead of the cramped gift shop found inside the doorway of the current building, the new museum would have a 1,160-square-foot bookstore. It would also have a restaurant with water views.

Right now, a mere 30,000 people enter the ICA's building each year. (The Museum of Fine Arts, in contrast, has more than 1 million annual visitors, on average.) Medvedow is projecting 200,000 annual visitors to the new ICA. She also hopes to boost the museum's staff from 24 to 40 and its annual budget from $2.4 million to $7 million.

To do that, it is counting on the generosity of board members and contemporary art supporters across the city. So far, the museum says, it has raised $24 million of the projected $37 million in construction costs, with $16 million coming from donors and $7.5 million-$8 million more from the future sale of its building. The ICA is looking to raise $60 million in total, $14 million for its endowment and $9 million to move from one building to another. Yesterday, ICA officials declined to release the names of donors other than Barbara Lee, who has contributed $5 million and become chairwoman of the ICA's newly formed collections committee.

Paul Buttenwieser, a Belmont psychiatrist who said he has donated to the campaign but refused to say how much, believes the release of the design will help raise the remaining funds.

''It's hard for people to start donating unless they have a visual and more detailed understanding of what it is they're supporting,'' says Buttenwieser, an ICA trustee. ''Of course it's a challenge, but I feel very confident that we're going to be able to do it.''

The new building would not simply be on the water; its every crevice is designed to take advantage of a spot coveted by countless developers. Flanked by the Harborwalk and featuring waterside views of the Boston skyline, the museum's facade would be composed of several varieties of glass, according to the plans. Most of the art would be contained on the fourth floor, which hangs over the building like a glass diving board. Along with two large skylighted galleries, the proposed museum would feature a long, narrow gallery that spans the entire 128-foot width of the building. A vast wall of lenticular glass, which is foggy when viewed at an angle but clear when stared at straight ahead, would offer visitors varied views of the water.

Outside, visitors could sit in the open air on rows of ''grandstand'' seats or get a table on the restaurant patio. Inside the building, they could sit in an auditorium that would take up two floors of space and could be darkened with curtains or opened to waterfront views.

Even the media center, accessible from the fourth floor, shows off the view, with a rectangular window angled down to block out the sky and horizon, showing only the ocean. The ICA compares the effect to gazing through a viewfinder.

''When I saw the drawings for the design of the building, I burst into tears,'' says Lee. ''It was a breathtaking design. I think it's a monumental architectural form that the city of Boston will be proud of.''

Back in 1999, when the city selected the ICA for the South Boston site, the museum was meant to be the cultural component of the Chicago-based Pritzker family's 2.9 million-square-foot Fan Pier project. Now it could be the first building on the site. In June, state officials issued the Pritzker's development corporation permits for the construction of nine buildings, plus parks and water transportation, on the site, but the developers are still not sure when they can break ground.

Kyle Warwick, principal with the Pritzker family's development corporation, said yesterday that much of the development depends on the ability to raise money.

''The worst-case scenario is that the ICA is out there alone for a couple of years,'' he said.

Warwick would have liked the ICA to delay its construction so it would be coordinated with the larger development, but he said he understands why the museum is pushing forward. The developer is negotiating basic issues such as parking and costs of utility construction.

''The momentum's behind the ICA's new location, and I think there's a great opportunity to become a new beacon on the waterfront,'' he said. ''And I think they can do it.''

Medvedow says that she is prepared to pioneer the site and isn't concerned about its location, far from the busy sidewalks surrounding the Boylston Street museum. In addition to the Pritzker plans, developer Steve Karp has proposed building a million square feet of offices, hotel space, and residences on the site. And by the end of 2003, the MBTA's Silver Line bus is set to open a stop right next door, at the Moakley Federal Courthouse. There will also be plenty of parking and water taxis.

''One thing I think will dramatically change is perception,'' she says. ''It's a very short walk from South Station and Rowes Wharf and the financial district. Once you've done the walk, you can see it's actually quite quick.''

Geoff Edgers can be reached at gedgers@globe.com.