Rejecting offers for a presentation by McCourt Company of a proposal to share development rights between McCourt and Fan Pier property on the South Boston waterfront, Mayor Menino and the BRA have dismissed any consideration of the plan -- one already supported by leading environmental advocates of the Conservation Law Foundation. Other waterfront advocacy groups and community groups have expressed interest in the merits of the plan.

The mayor's harsh judgement was rendered based on a briefing by the BRA -- without viewing the McCourt Co. presentation, and without benefit of a single public dialog or hearing. Reports indicate that McCourt Co. representatives have attempted for weeks to make a presentation to the Mayor, but calls to the Mayor's office were not returned. Rudimentary printed literature was not made available until March 29, so the plan, even with a BRA briefing, was seemingly rejected sight unseen. And the reasons cited in press reports for the hasty dismissal did not address the overiding criteria: whether or not the McCourt plan would serve the South Boston Waterfront Public Realm Plan (PRP).

At SAND, the dialog just began regarding the merits of the McCourt proposal. Only one member of SAND has seen the presentation in its entirety, and registered enthusiasm for a number of urban neighborhood ideals, including increases in open space, a well-proportioned mix of commercial and residential density, a shift of maximum height back from Old Northern Ave to New Northern Ave, decreases in waterside density and a downscaling of heights as buildings approach the water's edge. These are all major elements of the vision set forth in the PRP -- and those criticized for their absence in the Fan Pier proposal being heralded by the BRA.

SAND has asked the McCourt Co. to engage in a series of public presentations and has received word that the company intends to build widespread community support. 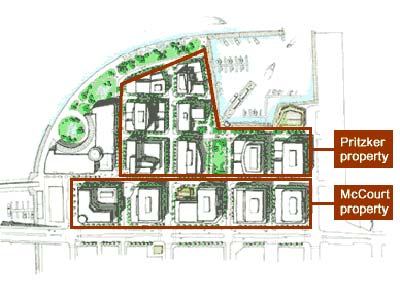 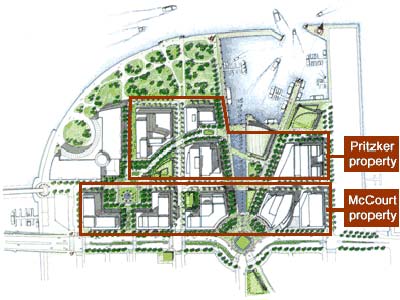 
Your comments as a visitor to the SAND website would be appreciated and forwarded for discussion.