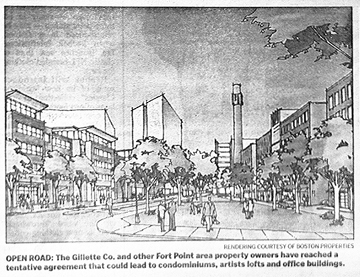 After years of bickering and legal blows, a group of major Fort Point Channel landowners - including Gillette Co. - have reached a broad consensus on building out one of the Hub's last development frontiers, sources say.

Gillette, which has a major manufacturing plant along the channel, has for years warily eyed efforts to redevelop the area's collection of parking lots and old warehouses.

Now the giant consumer products company, along with such other Fort Point area landowners as Beacon Capital, have reached a tentative agreement on a series of new road connections that could pave the way for millions of square feet of condominiums, artists lofts and office buildings, sources say.

Gillette has traditionally resisted Fort Point development out of concern it might clog roadways into its vital Southie razor manufacturing plant. Gillette and Beacon sparred legally a few years ago over the Hub real estate firm's construcion of a condo building in the area.

But the agreed-upon series of roadway expansions and connections will let trucks from Gillette's manufacturing plant reach a local construction haul road, while also helping funnel the expected crush of traffic from development projects.

``Everyone has been very constructive,'' said Alan Leventhal, Beacon's chief. ``The beneficiaries are the city and the people of the neighborhood.''

The major Fort Point landowners - Gillette, Beacon, Boston Wharf Co. and the U.S. Postal Service - have agreed to two new connector roads for Gillette-bound trucks. One of the connectors will cut across a large parking lot owned by the postal service. While the Fort Point landowners are seeing eye to eye on big development picture, many details and issues still need to be hammered out, officials cautioned.

``We are pleased with the (roadwork) plans,'' said Stephen Brayton, a spokesman for Gillette, adding that ``there are issues still to be resolved.''

Beacon has been out front with Fort Point development plans, rolling out a proposal to make an old industrial block into a trendy boulevard of artists galleries, condos and high-end offices.

But Beacon is no longer alone in laying big plans for the Fort Point district. The postal service unveiled a proposal earlier this week for close to 4 million square feet of residential and office space on a 20-acre-plus parking lot it owns. The plan includes space for as many as 1,200 condos and apartments along a new road, Fort Point Boulevard.

Paul Restuccia contributed to this report.