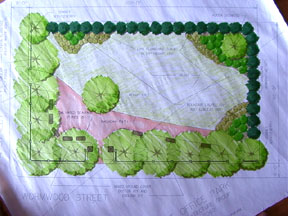 Over a number of years, the US Post Office, Fort Point residents and property owners worked with the Central Artery / Tunnel to complete the design of a neighborhood park. -- the first park in the entire district. The park dimensions are 100' x 60' and will be sited at the corner of Wormwood Street and A Street.

The US Postal Service, current owner of this parcel, agreed to create this small park as part of land rights negotiation with the Central Artery.

This park will be completed in 12-18 months, as part of a larger 1D6 contract. The final design include tall plantings along edges (abutting USPS fenced parking lot), trees, a wrought iron (or similar) gate with entrances on A and Wormwood. The main entrance will include large ornamental granite columns retained by the Central Artery from the demolished "House of Bianchi" building once sited near the parks' A Street location. Original seawall stones from area excavation will be placed for seating (along with more comfortable benches).

Although this park is part of a larger swath of greenspace visioned in the City of Boston Public Realm Plan and the more recently formed Boston Redevelopment Authority Fort Point Working Group's plans, neither the City Parks Department or Metropolitan District Commission will accept responsibility for its long-term maintenance. Instead, the USPS has agreed to maintain the park until the land is sold or conveyed to a new owner.

The interim condition, to be implemented in the Summer of 2002, will include loam and seed (i.e. grass) and a number of trees uprooted and replanted from a temporary A Street location.